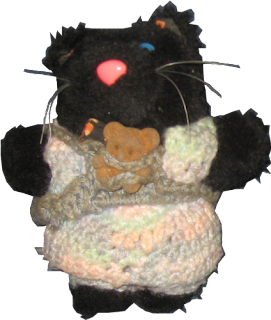 This is Teddy's son, Tee, with his action figure, GI Ding. The following is a story Tee and Mommy wrote together about an errand he ran.
* * * * *
"Going to Rite Aid for eggs. Do we need anything else?" I asked as I put on my shoes.

"If you want, but we also need dishtowels and a nightlight. Can you manage all that?"
"I'll take my wagon," answered Tee, as he headed for the door.

"Oh, yeah!" he laughed. "Ummm, Grandma, how much are dishtowels?"

"I don't know. Haven't bought any for a while."

"Ummmm, how much is a nightlight?"

"Same deal, I don't know. Do you think you might need more money?" I asked, trying not to give away familiarity of his game.

"Ummmm, can I buy something for us, too?" Tee added, as he drew a circle in the air around his family on the sofa.

He smiled, grabbed my money, and stuck it down his shirt and into his pants.

He slipped through the mail slot, jumped down the first two steps, turned right, jumped over onto the large container next to the steps, grabbed hold of the Kale Walking Stick's dried leaves, swung down off it like a Tarzan rope, and grabbed his little red, Radio Flyer wagon behind the planter.

His wagon rattling behind him, off he ran, carefully calculating the ruts, cracks, and missing pieces of sidewalk, so he didn't have to yank his wagon out of such traps. As he turned the corner, he knew he was in dangerous, but fun, territory. Sam, from "Sam's Music" shop, had the sidewalks repaved along the entire side of the block that he owned.

Tee took his wagon to the opposite side of the trees, along the curb, as the teenagers walked by, unaware. After the danger passed, he pulled his wagon onto the new cement, climbed in with just one leg out, and rode it down the small downgrade, like a wide scooter, left leg pushing. The wheelchair access ramp is the best hill, but pulling it up the other side of that small street, spoiled the fun. Hiding behind the Rite-Aid's sign pole, he waited as more People passed. He knew which People could see him, and all others couldn't.

The Rite-Aid door was opened!

Yippee! Spring is coming! I don't have to sneak in around People going in and out!

As he pulled his wagon through the store, the perfectly level tiles kept it from rattling, giving him the stealth needed for such work. He knew the store, Stock People, and cashiers, so he was fairly safe, but no one at five inches tall is ever safe in a world full of giants.

Maneuvering around feet and carts' wheels, he ran up the aisle where the dishtowels were supposed to be. No towels. He hid his wagon under the shelving at one end of the lane, so he could run up and down one more time. Definitely no towels, but he did find the toy section. He pulled the trusty climbing rope with the safety pin hook out of his backpack, and twirled it up to the shelf with the balls. Once up, he checked out the different size footballs and baseballs. They were fun to play with, but he already had some at home, so wouldn't waste his money on them. As he started to climb down, he noticed nightlights across the aisle.

Most of them were plain – some clear and some frosted.

Then he spotted the good ones. Some had pink balloons and ribbons, but one had stars and a crescent moon. He forgot to check prices, but took that one. It clunked into his wagon, as he barely grasped the handle, to run down the lane where the eggs were. Someone was staring at the assortment of cereals, so he waited for the danger to pass. People were more apt to see stuffed animals walking around, if they weren't in such a hurry to get somewhere.

When it was safe, he propped his wagon up against the glass door of the dairy section, pulled out the rope and hook, climbed to the eggs shelf, and opened up the top carton. He danced a soft-shuffle across each egg, to make sure they moved. No movement meant egg goop was stuck on the carton, so an egg was broken or would have to break to be used. He smiled when the soft-shuffle worked on the first carton. Pushing a carton off other cartons was tough to do without breaking more eggs. At times like these, he was always glad that Grandma had crocheted a huge safety pin at the end of the climbing rope. He adeptly pinned the carton shut, right in the middle, and carefully lowered it to the floor. Once it had slid off the refrigerated section onto the floor, he slid the other end of the rope underneath a half-gallon carton of milk, and climbed down. With a flick of his paw, he pulled the rope out from under the milk, like magicians pulled tablecloths out from under dishes, without dropping a single dish.

The wagon was pulled off the door, and the eggs were loaded in. Just across the middle aisle was his favorite section – cookies! He loaded the rest of the wagon with animal crackers and vanilla wafers, and rushed off to the cashier. It was dinnertime for most People, so he didn't have to wait. She didn't notice him, though.

A face peeked over the counter pass the rows of candy. "Oh, sorry! Didn't see ya, Tee," the woman responded. Tee tried hard not to grimace.

"I'm sorry. I'm stuck at this end of the counter. Do you mind if I give you a bag to put everything in?" she asked, as she showed him a plastic bag big enough for his purchases.

"Nah, toss it down! Do you mind if I catch a ride up?" asked Tee, always happy when People didn't treat him like baby.

The floating bag landed on top of him, but he had it opened and was loading everything in it, almost before he got out from under it. Once everything was in the bag, he pinned it with the safety pin, and tossed the other end of the rope up onto the counter. He climbed on, holding the bag's handles like a swing, and inhaled deeply as he passed the chocolate and peppermint candies.

As the cashier emptied out the bag's contents and rang everything up, Tee turned his back to her, and pulled the money out of his secret place.

Tee smiled, knowing Grandma and Grandpa would be happy that he only had to break one of the bills. He stepped on the edge of one bill to make it easier to pull the two bills apart.

The phone behind the counter rang, as he handed her the one 20.

"Oh, nuts! The computer is down! They're rebooting. Can you hold on a minute," she asked politely.

"Want me to fix it?" Tee asked, already climbing over the chocolate-covered cherries wrapped in red aluminum to get to the main computer. "We're excellent computer techies! It's part of our jeans!" (Try to explain "genes" to stuffed animals.)

She laughed, but not at him. "No, that's OK; it's already almost done rebooting. Thanks for the offer though. I'll remember that."

Tee sat down on a chocolate-covered cherry, and swung his feet, as he looked back. A line had formed behind him.

He tapped his chest to make sure the money was still safe, and made a mental note to run home quickly, just in case.

Here's your change, sir, and would you like me to lower your bag for you?"

"Yes, please! That's always fun!" he answered with a big smile. He glanced down to make sure no one had accidentally stepped on his wagon. It was still safe, although it had been kicked under the counter.

She reached as far as possible over the counter, and lowered Tee and the bag together, just missing the wagon.

"Thanks!" he called up, while loading his wagon. He felt many eyes staring at him.

I will never understand why so many grown-ups are always surprised by a walking and talking stuffed animal. What is wrong with their brains? They saw us walking and talking when they were kids! Gotta be becoming a teenager! How would they like it if I stared at them? Humph!

Tee felt the flush of anger on his skin, but fear took over, and he ran out the door as quickly as possible. Instead of immediately turning left to run home, he ran straight down the wheelchair access ramp, before turning left. No one ever looked for stuffed animals along the gutters.

More People were walking along the sidewalks, by the time he got to the next block, so he continued along the gutter, until he came to the container of ivy. He used the hanging ivy as leverage, while he pulled up his loaded wagon, and then waited for all the People to go away. Popping out from under the ivy, he enjoyed the newly cemented sidewalk again. On the last section of that sidewalk, he fell into a two-inch deep hole.

How did this gorge end up on the new sidewalk? What do People do to sidewalks?

After he climbed out and dusted himself off, he watched where he was going better. Once home, he called in for some help. He grabbed the vanilla wafers, Ding grabbed the animal crackers, and Uncle Spaulding brought in the rest of the groceries, while Daddy hid the wagon behind the container.

As Ding and Tee climbed up the sofa, Grandma smiled and asked, "I thought I told you not to buy anything big?!"

Tee gave her the patented blank stare, before he answered, "these aren't big, Grandma!" He held up one animal cracker and one vanilla wafer, before he added, "See?" I can hold one of each at the same time, and they're still smaller than me!"

I'm so glad that you guys are back online and blogging!!

I like your story. My mom would never let me go to the store all by myself. He must've been so brave!

You just have to be sneaky enough to avoid being bearnapped. Independence is a great thing. Try, "but I want to help you more, Mom!" kehehehehe