We admit it and Mommy accepts it. She has got to be the worstest narrator in the entire world and she forces us (that's right - "forces us") to say things that we're just too smart to say.

So, although Spaulding gave a fantastic narration for our garden, we've decided to let Mommy tell more about our garden in the latest videos. (That and she says we have to get a b-a-t-h if we're to go in front of the camera. Humpphhhh!)

So here's a look at our garden this month.
And, just because we often forget out front garden is also part of our garden, here is a look at allllll of our front garden (with some cool motorcycles going by at just the right time to make Mommy's narration sound good.)
That's it.

That's the latest from the T. Bear family.
(Sorry about this, but we're busy fixing up our first novel and need Mommy's assistance. People don't have Axlerod's Magical Time Thingy. They can't stop time to do two things at once, so we forgive Mommy, since she's only a People.)

Oh. And speaking of our good buddy Ax. 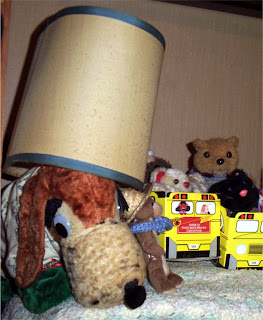 (That's him partying with a lampshade on his head. He has his own lampshade now.)

Tomorrow (August 2, 2012) is his 8th anniversary of his 39th birthday. (For those who don't mind getting older and OLDer on their birthdays, that means it's his 47th birthday. But he's smart, so he never wanted to get older than 39, so he hasn't.) So wish him a happy anniversary (and he likes Dinty Morre Beef Stew, if you want to give him a gift. We like hotdogs.)

Nice garden! You should tell your Mom that bear adventures (and postings) are just as important as novels!